Around a week ago, the Dingor Criminal Syndicate kidnapped 5 IDAP operators providing aid to a nearby town. After multiple demands IDAP has elected to send Theseus in to rescue them.

The DCS are well known as Pirates, stealing anything with any kind of value no matter what it is. The well known HQ of the DCS is located inside Guayucca, a huge warehouse building. Unfortunately the warehouse is also a legitimate operation which means it does have some innocent civilians working inside. Criminals of the DCS are typically lightly armed. They have been known to carry RPGs and some even use plate carriers. The main tactic of the DCS is overwhelming force but it's not clear how they will react to meeting a trained force that isn't the police.

It's also highly likely that after declining the initial demand for payment, The DCS may have executed some of the hostages.

Crossing over to the Northern side of Dingor is considered dangerous as the 3 bridges are controlled by different factions at any one time. The Eastern bridge is currently controlled by Police but we cannot say how long that will remain true.

The Civilian population inside Guayucca is very used to the presence of the DCS and will probably not flee if a firefight breaks out. 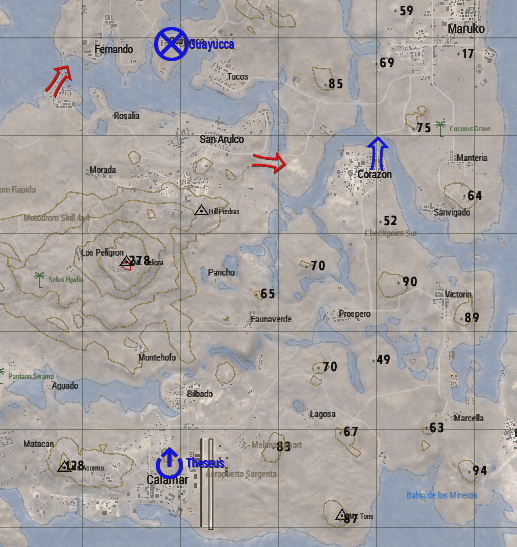 Theseus was tasked with rescuing the 5 IDAP personnel that were held hostage in the town of Guayucca.
We assaulted the town, and managed to find the hostages. Unfortunately, one of the hostages had already been executed.
We recovered the others, as well as the body of the dead IDAP personnel, and returned to our FOB.

No Theseus contractors were lost during the contract.