Theseus raids on militia transport and revenue sources and the defeat of their major counter-offensive, even with unexpected help, has led to a dramatic slowdown in the ethnic cleansing campaign against ethnic Karzegh inhabitants of Southern Takistan. With their mobility gone, the Takmyr militias and their Taliban backers are now fragmented and are unable to concentrate their forces without complex planning and hours to days of travel. They are now operating using low-tech insurgent tactics.

This sharp decrease in Takmyr militia capabilities has given Theseus the freedom to join MSF in its campaign to evacuate Karzeg civilians from areas of high risk and move them to the safe zone. In addition, we have deployed engineers to begin expanding Theseus' scratch positions at the Sar-e-Sang pass, turning the area into a properly fortified outpost with defences against potential VBIEDs and facilities for non-rotating staff.

One unexpected development has been a flurry of activity from the Takistani Army. It seems a munitions depot near the North of our AO exploded three nights ago; it caused a minor earthquake and tracers cooking off could be seen from our positions on the pass many kilometers away. Details are sketchy at best. The direct result for Theseus has been the withdrawal of personnel from outlying Takistani Army outposts and a temporary reduction of the air defence threat to our operations. However, with even fewer official authorities present, Southern Takistan has reportedly become even more lawless.

Joint Command has received an urgent call for aid via mobile phone from a small Karzegh community just over the Bala pass. It appears that the Takmyr militia are still trying to achieve their goal of ethnic cleansing, and have been reported to be using donkeys and horses to amass a force large enough to raid the now partially militarized remaining Karzegh villages.

The closest force able to respond to the militia concentration and evacuate the threatened civilians are the M1126 Stryker APCs protecting the MSF convoy 'Coeur de Lion,' the cargo of which is composed mainly of vulnerable evacuees. Joint Command has urgently requested that Theseus take over convoy protection duties, freeing the Strykers to save the Karzegh village.

Convoy 'Coeur de Lion' has designated a rendezvous point at a nameless remote village between Timurkalay and Falar. Theseus is to travel to the convoy location, receive the handoff, and safely deliver the civilian evacuees to the Sar-e-Sang pass fortifications for processing.

Secondarily, Joint Command is concerned that the recent withdrawal of the Takistani Army from its outlying positions may have attracted the Tehreek-e-Taliban or organized militia bands looking for abandoned equipment. The Feruz Abad army outpost, recently abandoned, is on your primary route to the MSF convoy. Inspect the outpost and destroy any usable equipment remaining. If well-equipped groups of looters are present, it is presumed that their cache site is nearby and contractors are to pursue them with extreme prejudice and dispose of any looted supplies.

Recent sorties North of the pass have shown that the Takmyr militia and any Tehreek-e-Taliban forces in the area have reverted to time-tested insurgent tactics. What contact has been encountered has been low-intensity sniping- thankfully it seems that few of these militiamen are sophisticated enough to mount ambushes, let alone make IEDs.

Most of the combat reports have, however, been from MSF, whose armored personnel carriers may have posed too hard of a target for the average militiaman. What are to appearances civilian sport-utility vehicles may prove a more tempting target; however, even full power rifle cartriges fired at medium to long range will have difficulty penetrating the armor of an Arcadian.

Command believes that we are unlikely to encounter much beyond obsolete bolt-action surplus arms unless we manage to stumble upon a group with access to an insurgent cache, of which there are still a few remaining from the Takistani civil war and following insurgency. Contractors are advised to structure their teams with additional marksmen and magnified optics.

Because of the lessening of the air defense threat, Theseus command has approved the use of a high-altitude reconnaissance drone to provide overwatch for the convoy. It is unarmed due to the prohibition in our contract on explosive weaponry but should have enough loiter time to help spot enemy snipers.

Weather for the day is clear with no chance of rain. Due to the withdrawal of forces towards their main airbase, most Takistani army checkpoints in the region have closed. However, our route will still be circuitous: MSF has confirmed reports of rock falls that have made areas near the rendezvous point impassable. 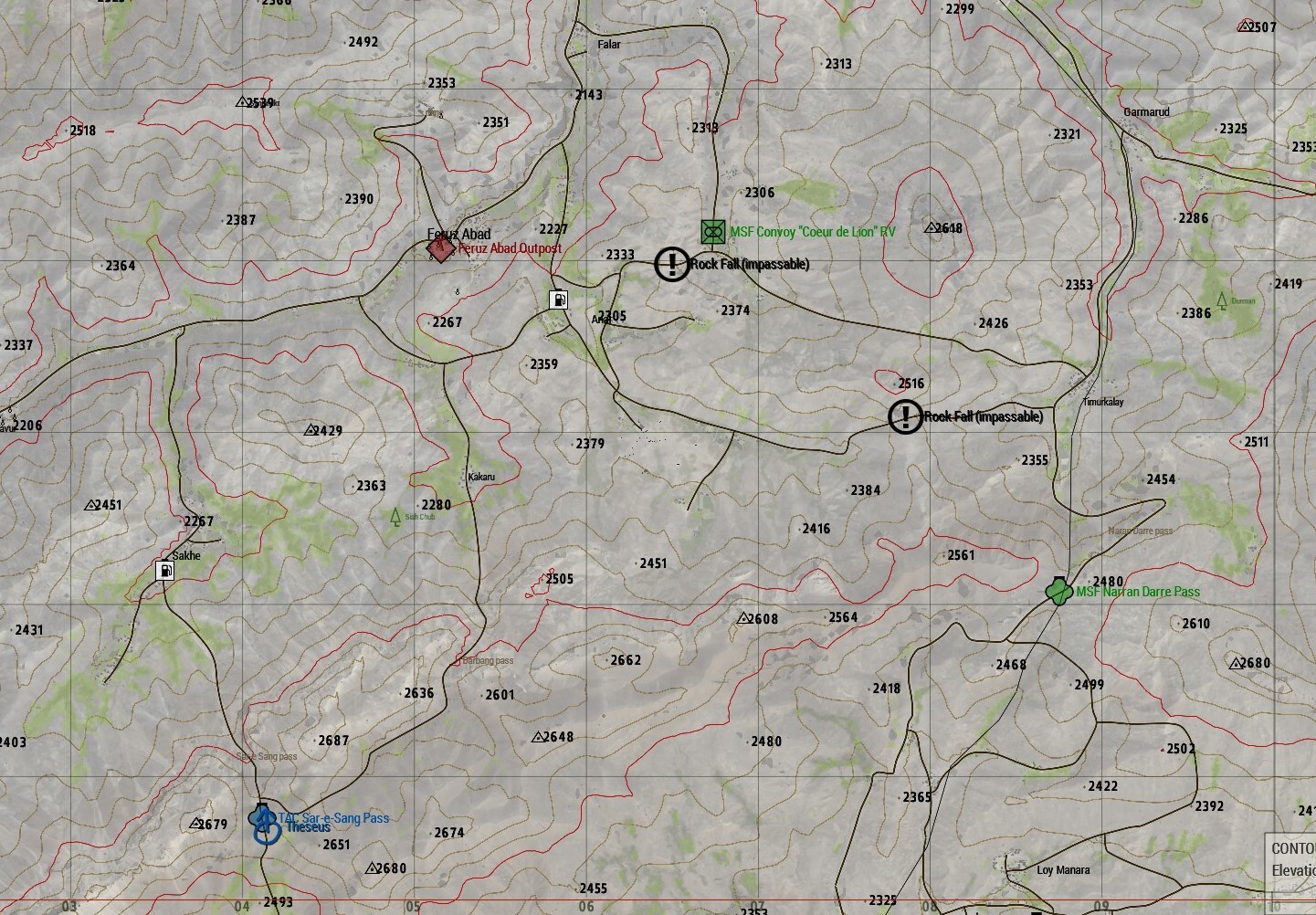 Theseus had to take some refugees from MSF and safely deliver them back to base. While our forces were enroute have dealt with an insurgent cache and the outpost that was left behind by the Takistani military. Most of the enemy forces have been dealt with and every refugee got to the camp safely.

No contractors got KIA