A coalition of NGOs, headed by IDAP, has hired Theseus and Militares Sans Frontieres to act where the United Nations will not and stop the ethnic cleansing of Karzeghs in Takistan. Theseus is currently based out of Loy Manara airfield with significant contingents holding the Sar-e-Sang pass to hold a 'safe zone' for ethnic Karzegh refugees.

Theseus' mandate is to work with MSF to stop the genocide and allow as many civilians to escape to IDAP-run refugee camps in the Karzegistan border region as possible. The NGOs hope to pressure either the UN or Takistan's government into acting quickly, lest they undermine their precious sovereign rights. Thus far, the Takistani army has not involved itself in the fighting, giving tacit approval both to the Takmyr militia activities and to the NGO-led intervention.

MSF has been brought on as a predominantly mechanized contingent, while Thesus' role is primarily light duty ground assault and air-mobile. Although we have worked against MSF many a time, today they are our allies and have formed a joint contract command with Theseus for the duration of the campaign. All contractors are expected to maintain professionalism and refrain from indiscipline around MSF personnel.

One of the major terms of our employment under the NGOs is that no explosive weaponry may be used. Due to an extreme aversion to UXO, we are under Ottawa treaty restrictions and all contractors are to refrain from using non-command detonated explosives. While this leaves us able to continue using placed explosives, it means that we are unable to use fragmentation grenades, APERS or AT launchers, HE grenade ammunition, or rockets and missles for CAS. Theseus command does not expect these restrictions to be onerous given the low-tech nature of our foes for this campaign.

With Narran Darre and Sar-e-Sang passes secured, we have successfully blocked Takmyr militias from attacking the border refugee camps. The next stage of operations is to radically slow their advance while evacuating the most vulnerable civilians.

As the airmobile component of the force, MSF-Theseus joint contract command has tasked Theseus to perform a night raid to degrade the Takmyr militias' mobility and financing. Meanwhile, MSF forces are preparing a ground sortie using their light armor to push past the passes and extract the most vulnerable populations in the path of the Takmyr militias.

Theseus is to conduct a night-time heliborne raid on Takmyr militia North of the safe zone. We are presumed to have strategic surprise but suppressor use and stealth approaches are at the discretion of the commanding officer. There are two major target classes.

First, Joint Command has confirmed reports that the Tehreek-e-Taliban Takistan are stealing crude oil from foreign oil concessions in order to finance their activities, including the ethnic cleansing. Foreign civilians and security personnel have long since been evacuated and local workers have fled, but ethnic Takmyr fighters have taken advantage of their absence to to sell oil on the black market. Our objective is to strike at the oil production areas and destroy their pirate tanker trucks.

Second, while Theseus overran most of the vehicles used in the first push, the Takmyr militiamen have brought up their reserves and are planning to distribute them to their comrades billeted in abandoned homes in the morning. They have gathered their new vehicles in 3-4 large bivouacs for trusted veterans to guard during the night. The militias depend upon their trucks and technicals to conduct their rapid campaign, and Joint Command has tasked us with destroying these vehicles to give Karzegh refugees more time to flee.

There are a fixed number of places where Tehreek-e-Taliban Takistan may be stealing oil. Major oil fields and processing facilities have been identified in the map.

Command does not have a clear idea of where militia bivouacs may be located. However, intelligence has confirmed that the miltia are avoiding official Takistani military bases. Theseus is also advised to avoid the airspace due to the presence of air defenses.

We have very little intelligence on the locations of enemy vehicle bivouacs except that the second wave of fighters has not been reported to reach south of 0800 Easting. Theseus units should concentrate their search above that parallel.

Enemy bivouacs are likely to be camouflaged using netting and will likely contain substantial groups of Tehreek-e-Taliban fighters, who do not tend to travel with civilians.

Takmyr militiamen and Tehreek-e-Taliban Takistan formations use Cold War surplus weaponry and do not use armor. Expect small arms, light machine guns, grenade launchers, RPGs and some truck-mounted or emplaced heavy machine guns. Among the light vehicles used, there have been no reports of dedicated anti-air weaponry.

There are also various civilians present in the AO; the ethnic cleansing campaign has caused widespread displacement of the population and you may encounter civilians encamped in remote areas. While they are unlikely to be in the vehicle bivouacs, some may be armed with civilian-grade bolt-action rifles or shotguns as is common in the region. Contractors are advised to use discretion when identifying targets. 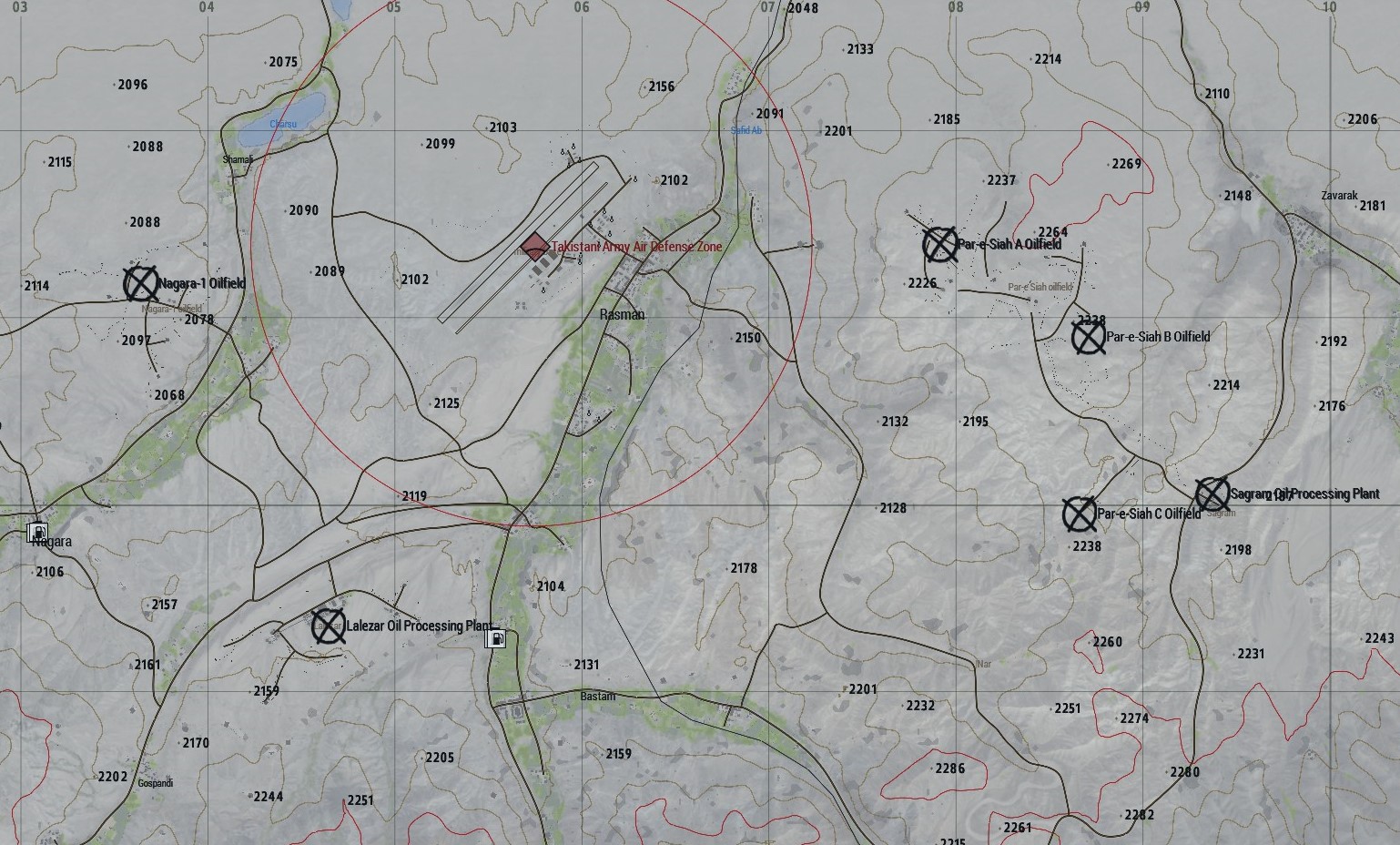